Who is On My Baseball Glove?

When you are a kid who loves baseball, the players that autograph your glove are very important!  These are the players who left their mark on your most sacred piece of property.  This was my glove from the time I was 8 thru 11 (I think).  I accumulated these autographs through many trips to Sounds games in the ’80s.  I have some great memories of going to the Sounds with my parents in the ’80s.  That was our favorite form of Saturday night entertainment.

Over time, these autographs start to fade.  So, as a kid, you just trace over them with a Sharpie.  Because, you would never want the good ones to go away.  But, when I look at this glove now, it’s like a time capsule – a time in baseball history that is special to me. 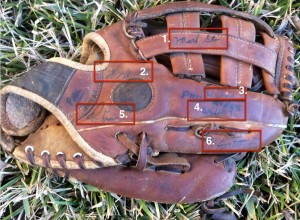 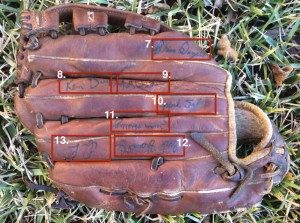 4.  Willie McGee – the GREAT Willie McGee (http://en.wikipedia.org/wiki/Willie_McGee)  For those of you who remember Sounds’ history, we were a franchise of 4-5 different teams in the ’80s.  One of those was the Cardinals.  I got this when the Cardinals came in town for an exhibition game.  What a great player he was.

7.  Brian Dayett – (http://en.wikipedia.org/wiki/Brian_Dayett) Dayett was a right-handed outfielder.  This – in my mind – was the glory days for the sounds.  He was in Nashville, 1980-’82.  He was the first player that I remember actually seeing play who went on to the Show.  He went on to the Yankees (yet another team the Sounds were an affiliate for).

8.  Ken Dugan – I know I said that these autographs came from my trips to the Sounds.  This is the exception.  Ken Dugan was the legendary baseball coach of Lipscomb University.  Every year as a kid, I would go to the Lipscomb Baseball Camp.  It was a great camp for teaching fundamentals.

9.  Matt Winters – He was a right-handed outfielder who played for the Sounds in ’82.  He was the first round pick of the Yankees in ’78.  This is how he ended up with the Sounds.  And, he only played in the Show in ’89 for the Royals.  Here is his baseball card with the Royals.

11. Brian Poldberg – Catcher and first baseman with the sounds, ’81-’82.  He has gone on to have a career as a minor league manager.

12.  Buck Showalter – (http://en.wikipedia.org/wiki/Buck_Showalter) One of my heroes growing up.  Buck did 4 years with the Sounds (’80-’83).  He was a first baseman and so was I.  I loved watching Buck.  Little did I know – until the Internet came along – that he was called “Buck” because he liked to walk around “buck naked” in the locker room.  Suddenly, the innocence is gone.  Anyway, he was a great player.  And, he is obviously more well-known for his career as a manager.

I saw some great Sounds players over the years.  From Dibble to Tabler to Balboni and even a short stint by Mario Soto.  This glove brings back great memories.