By Phil Ayres on September 1, 2015 in Marketing, Politics

Well, you gotta’ hand it to him:  like him or hate him, Trump knows how to get the word out.  Never has there been a Presidential candidate who has caused such a splash.  According to Google Trends data, Trump gets 5-7X as many searches for his name in Google as Hillary Clinton (the next most frequently searched).  But, is all press good press? 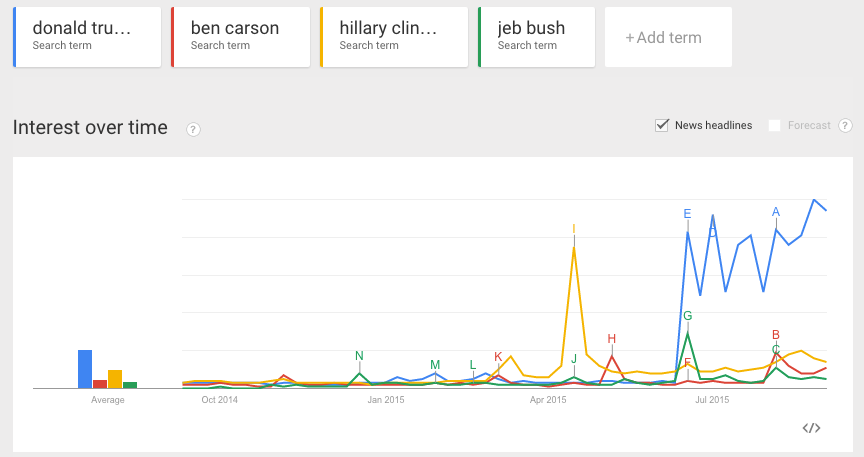 Only time will answer that question in this race.   But, what is the Donald doing that others are not that makes him so successful?  That’s the most intriguing aspect, for me, to the rise of the Donald.  For me, these are the keys to the Donald’s marketing kingdom and the reason for his rapid ascension:

1. Capitalize off of timing.  I can’t think of another time when this Trump dynamic would have flourished more than now.  The best reference point in history that I can come up with to identify the point where we are with the Trump campaign is 1828.  Fresh off the “Corrupt Bargain” that put 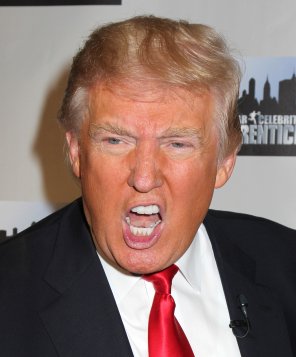 John Quincy Adams in the White House in 1824, Jackson won in a landslide.  This was a pivotal/transitional point in American history.  We were transitioning from being governed by an elite ruling class to a more agrarian form of leadership – led by common men.  This was a huge break from the elitists who had led the country at its founding.  Yes, yes, I hear ya’.  Trump is a billionaire.  But, hear me out.  The success of the Trump candidacy is grounded in a lashing out against a Republican establishment – the likes of which we have not seen before.  The party elite have produced Jeb Bush and the people have rejected him.  They are angry.  And, the Republican establishment is getting shouted down by the Republican primary Trump supporters.  The Republican Party wants a candidate to stand up to Obama.  And, Jeb Bush is not perceived as being that strong angry voice against the President.  Essentially, Trump is capitalizing off the perfect storm of timing.

2.  Be different.  Bush says “X”;  Trump says “Y”.  Everything Trump says is unconventional.  No Republicans were even talking about immigration until Trump got in this race.  He made it “THE” issue.  He lashes out against political correctness.  He attacks the media.  He is – in one word – different.  Meanwhile, pollsters and consultants don’t know what to do with him.

He feuds with Rosie O’Donnell

He lashes out against Megyn Kelly and calls her a bimbo.

Sure, you can argue that these aren’t “the right enemies”.  But, let’s dissect this for a minute.  Rosie O’Donnell is largely disliked by most Republicans.  She is a safe target for Trump.

Megyn Kelly – it is believed by many – went after Trump in the debate.  So, can anyone blame him for lashing back?  He can justify that.  Admittedly, he has probably gone too far.  But, his initial bout of anger was acceptable.  And, frankly, given that Republicans are looking for someone to stand up up to Obama, his willingness to tussle actually endears him to many.

But, why are enemies good for him?  Enemies create headlines.  Headlines keep people talking.  They keep the media talking.  And, more importantly, they keep the media not talking about the competition.  Thus, the message of every other candidate continues to get choked out.  And, you just hear about one.

4.  Identify your demographic and go after it.  Say what you will.  Donald Trump knows his demographic.  And, he is going after it masterfully.  He has zeroed in on his customer – just as if he were working a gaming commission to land a casino.  He wears a trucker’s hat (think he has ever done that before?), talks about the Bible and how much he loves Billy Graham.  Who is this guy?  A guy who knows his demographic.  That’s who.

5.  Turn enemies into the problem.  I think Trump is masterful in showcasing and exposing the people in his path as the problem.  Whether it be Jeb Bush, Obama or Hillary, I think he will get better and better.  And, frankly, I think he will continue to sell the message that his enemies are contributing to the problems faced by the country.  And, his candid attacks down this path continue the proliferation of headlines and the free exposure that drive the Trump campaign.

In summary, it’s all about keeping people talking.  Keep people talking about you and they can’t talk about anyone else.  Solidify the base.  Otherwise, the exposure comes to an end.  After all, the “haters gonna hate, hate, hate.”

So, solidify the base.

I’ll bet the media is conflicted.  They hate the guy.  But, they love what a headline machine he is.  I do think he is quite adept using the media to drive his agenda.  And, it’s more interesting to me that the media continues to go along with it.

There really hasn’t been a force like this in American politics at the Presidential level since a man from Tennessee who killed a man in a duel came on the scene in the 1800s.  The Perot campaign was nothing like this.  Perot was a bit off the cuff.  But, his first steps were to hire a pair of Washington insiders to guide his campaign.  And, even though he went off the reservation at times, he definitely didn’t do anything like this.

And, frankly, I don’t see the Trump machine slowing down anytime soon.  It will be interesting to see where it stops.

How to Look at Mobile Results and Sites from Desktop
How I am Related to Robert the Bruce, King of Scots (my 20th Great Grandfather)