Origin of the Ayres Name 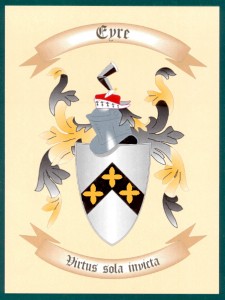 This account of the origin of the Ayres name comes from the Descriptive Catalogue of the Original Charters, Royal Grants, and Donations.  It is available here:

The Eyres came into England with William the Norman (William the Conqueror), and their possessions at Battle arose questionless from gift.  The first of the family was named Truelove, but at the battle of Hastings, Oct. 14, 1066, William was flung from his horse and his helmet beaten into his face, which Truelove observing, pulled off, and horsed him again.  The Duke told him, “Thou shalt hereafter from Truelove be called Air [or Eyre] because thou hast given me the air I breathe.”  After the Battle of Hastings, the Duke, on equiry respecting him, found him sorely wounded, his leg and thing struck off, ordered him the utmost care, and on his recovery gave him lands in Derby, in reward for his services, and the leg and thing in armour, cut off, for his crest, as honorary badge yet worn by all the Eyres in England.