Things to Learn from the Success of Retailmenot

By Phil Ayres on January 26, 2015 in Affiliate Marketing

Anyone who doesn’t know what Retailmenot is in today’s world is clearly hiding under a rock.  In just a few years, they have become the world’s largest coupon site.  It’s mind-blowing to me that this site and the company that has been built around it has only been around since 2006.  I have an unbelievable amount of respect and admiration for those who built the site and those who built the company around it.  (Those are 2 very different groups.)

So, where and when did Retailmenot come from?

In 2006, Retailmenot was started by 2 Australian guys named Guy King and Bevan Clark.  They had a small handfull of employees (I think 7).  The most famous of the employees was a woman named “Jemima”. 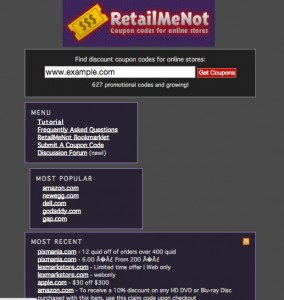 This is what RMN looked like when it went live in 2006. Hard to believe, huh?

In 2010, I started running affiliates for Hotels.com.  I quickly learned that Jemima was your go-to person if you needed to get coupons removed from that site.    Though they had only a small handfull of employees, they were dealing in a lot of volume and with a lot of Advertisers!  So, Jemima was overwhelmed with requests.  And, though she was very diligent, because of the time difference between the U.S. and Australia, it took Jemima 24 hours to get a coupon off a site after you submitted it!  Not an ideal situation.  But, she was awesome, nonethless.

Anyway, I think the initial success of Retailmenot came down to the fact that they just did things different.  Were there other coupon sites out there in 2006?  Absolutely.  There were coupon sites around in the ’90s.  But, frankly, most of the coupon sites relying on organic traffic were “playing SEO games” to get traffic, e.g., lacing the meta keywords tags with every keyword they could come up with, spamming blog comments, paying for links and every other tactic you could imagine.

But, Retailmenot was different.  They went the other direction.  I am told that they initially sunk a tremendous amount of money into P.R. – something other coupon sites were not doing.  Pretty soon, they started getting featured on CNN and all over the web – even though they had a similar product to other coupon sites.  And, because they did go in a different direction, they skyrocketed in the rankings.  And, they passed up all of the sites playing traditional SEO games.

Then came the acquisition by Whaleshark Media in 2010.

In 2010, Cotter Cunningham, the CEO of Whaleshark Media, led the acquisition of Retailmenot.  Even though this site was the organic leader in the industry, Cotter and his team saw potential.  And, they were right.  The initial founders of Retailmenot got them out of the gate.  But, Whaleshark Media ushered RMN into the next era.

Why was the potential so obvious to Cotter and why didn’t others take advantage of this opportunity?

If you looked at the landscape of affiliate coupon sites in 2010, some sites were doing organic well.  Some where doing competitive trademark bidding well.  Some did a great job with placements and media buying.  But, nobody was doing everything well.

This was the genius of Whaleshark.  They found a site that was doing organic well.  But, they weren’t marketing to a list.  They weren’t doing competitive trademark bidding.  You couldn’t buy a placement.  Everything was algorithm driven.

Cotter and his team realized – when nobody else did – that you could leverage the brand that was being built at Whaleshark to do all of these things.  They did, and they did it very well.  After the acquisition, they quickly brought in a crack product and account team to develop an effective CRM funnel, work out trademark bidding deals and initiate an ambitious program of media sales.  In time, they have become the affiliate leader in mobile and they continue to innovate ahead of the rest of the industry.

In short, they saw opportunity.  They capitalized on that opportunity and they leveraged that opportunity to lead.  So often, affiliates focus on starting a new project, e.g., a new site or app.  But, sometimes, you don’t have to start from ground zero.  Sometimes, the gold mine comes from just seeing something that is good and making it better.

There are some great lessons to learn from what the Whaleshark team did with a site started by a few guys in Australia.

Correlation, Causation and Other Fringe SEO Topics
Who is On My Baseball Glove?